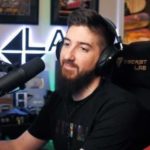 He and his wife have a cat named Nikita.

Veritas grew up playing video games. The first games that he played was Super Mario Bros. on an Atari 2600. His first personal console was a Nintendo Entertainment System. He played a wide variety of games including his favorite, The Legend of Zelda: Ocarina of Time, as well as Civilization 4, COD: Modern Warfare 2, Tony Hawks Pro Skater 1 & 2, Diablo II and Super Mario 64, among others.

He currently works fulltime as a software engineer at a consumer robotics company and musician, but prior to that he worked in sales and did not enjoy it at all. He was inspired to learn guitar in 2004 after hearing Steve Vai play Tender Surrender.

During high school, he got into Call of Duty 4 and discovered a website that enabled viewers to bet real money on teams that were competing in games like Call of Duty. As he was mainly playing free-for-all games at the time, he decided to start competing on the site, and made some money from it before they were eventually shut down. However, part of the requirements for proving that his team had won a match entailed providing them with video footage that showed it. He therefore did some research and purchased a capture card with which to capture his Xbox gameplay. This led to his creating video montage that he uploaded on to his old YouTube channel around 2004. He just did it for fun, as his channel never gained traction. But this experience proved useful to him when he made his second attempt at content creation as an adult.

In 2017, he got into PlayerUnknown’s Underground and was regularly placing in the top 10 on the NA first-person leaderboards at the time. So, he decided to start uploading to YouTube again, which he did in November 2017. He did so because many other players such as ChocoTaco and Shroud were growing at the time, and he felt that his skills were decent enough to possibly attract viewers as well. However, that unfortunately didn’t happen.

After a while, his IRL friends encourage him to try streaming instead. He decided to take that friend’s advice and started streaming on Twitch on March 17, 2018. He occasionally streams and competes with other streamers such as Geekseh, Sigma and AnneMunition.

He cohosts the Pogcast with JesseKazam. His language isn’t always clean.

According to Veritas’ Twitch bot, he has around 820 subscribers. This should place his base monthly income at around $2,050 USD. This excludes any additional revenue that he receives from merchandise sales, donations, sponsorships, Twitch cheer bit contributions and ad revenue.

Veritas' birthday is on November 10th.