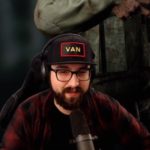 He and his wife have a dog named Buna.

He chose it because he’s a geek and he’s Canadian.

Geekseh grew up playing video games. When he was older, he got into looting video games such as Borderlands and The Dvision. One of his biggest motivations within any video game as been unlocking the in-game achievements, with his favorite console series being the Xboxes. His all-time favorite games are Halo 3, Call of Duty 4, Warcraft 3 and Escape from Tarkov. Outside of gaming, he also grew up playing hockey.

Prior to streaming full time, he was working two jobs in order to scrape by. He is a Red Seal chef by trade and even worked as a head-chef at one stage. However, the hours weren’t great for his social life, so he went into sales instead. But he didn’t enjoy that either, so he tried out other different jobs.

GeeksEh started streaming on Twitch on November 17, 2016 because he was feeling a little lonely after he moved to Kamloops for work. He only had his laptop to work with at the time, and so started out with Hearthstone, because that’s what his computer could handle. He grew very slowly and hit 4,000 Twitch followers in early April 2018. He joined Fade 2 Karma on July 28, 2018 and received Twitch partnership on August 4, 2018.

However, in December 2018, he decided to switch to EFT, as he become burned out after streaming Hearthstone for two years. He has been maining it ever since.

According to his Twitch overlay, GeeksEh has around 2,600 subscribers. This should place his base monthly income at around $6,500 USD. This excludes any additional revenue that he receives from tips, sponsorships, Twitch cheer bit contributions and advertisements.

He doesn’t have a set schedule but tends to stream daily for long sessions.

GeeksEh's birthday is on April 4th.