His username was originally Aqua Man because he and his group of friends decided to name themselves after superheroes when they were playing Legacy Rust. He later changed it to Maqua7 and then to AquaFPS in order to make it easier for him to pop up during searches.

AquaFPs has been in love with video games ever since his parents bought him a Nintendo 64 when he was 12 years old. His first real game was Mortal Combat on his N64, but his favorite game was The Legend of Zelda: Ocarina of Time. While he was growing up, he was into playing baseball and skateboarding. He started recording and editing video footage of he and his friends skating after his parents bought him an eMac after a great deal of begging. This was inspired by all of the skateboarding videos that were popular at the time. However, he stopped playing baseball after he breaking his arm while skateboarding. He also enjoyed producing his own music and still uses it in his videos.

After high school, he went on to attend college in Connecticut, where he graduated with a degree in Communications with a minor in Media Graphics Art. Although he grew up in the Suburbs of New York, he moved to NYC after college when he found a job there.

In February 2008, he decided to start uploading skits and his skateboarding clips to YouTube for fun. In February 2015, he decided to combine his love of gaming and editing together and began uploading Hearthstone content to his channel. He then moved on to variety content. He started maining Rust in April 2016 due to his love of survival and roleplaying games. He discovered it through a random Markiplier video.

He was inspired to attempt creating storytelling videos after watching other YouTubers such as VERTiiGO. This almost immediately caused growth on his channel, which was further boosted when he began collaborating with GuacamoleJones, followed by other content creators as well.

He still occasionally teams up with other streamers such as Klean, hJune and Pestily.

According to AquaFPS he has around 3,950 subscribers. As he usually attracts over 3,000 viewers, this should earn him at least $13,825 USD per month before he receives further income from tiered subscriptions, casting fees, sponsorships, Twitch cheer bit donations, advertisements, merchandise sales and tips. 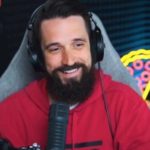