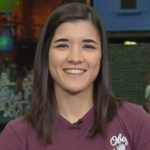 Bouldering, maintaining her graphic design skills and working on her car.

AnneMunition's mother has always been very supportive of her career decisions. She has a brother and a sister, as well as a dog named Rhea.

AnneMunition first got into video games when her mom bought she and her siblings a Super Nintendo console with Super Mario World for them when she was about seven-years-old. She and her siblings also played Game Boy consoles, often at the back of their mother's shop, when they were younger.

When they were older, her brother introduced her to shooter games such as Turok: Dinosaur Hunter and GoldenEye 007, which instilled a love of the genre in her. She and her sister mainly played Halo throughout high school.

Outside of gaming, she also composed music, but she lost interestas she got more into streaming.

She took a long break from serious gaming after she graduated high school, as she wanted to prioritze her college coursework. Although she originally planned on studying photography, she soon realized that it would be a very difficult field to pursue, and so switched to Graphic Design instead. Her degree took four years to complete, after which she went on to work asa fulltime Graphic Designer.

In early 2014, she was bored at work, as she didnn't have enough work to do, so she started browsing artilces online. During one of her browsing sessions, she read an article about Twitch. She thought that it sounded interesting and started watching streamers such as Lirik in the background while she was working. After a while, she decided to try it out herself, and so started streaming as a hobby after work time in June 2014.

By June 2015 she had garnered enough followers to switch to risk quiting her job to pursue full-time streaming. She first began playing Rainbor Six: Siege after being sponsored to do so in 2017. She fell in love with it and began maining it. This also lead to greater growth for her channel.

AnneMunition became a Twitch partner in 2018. Although she does still play Siege, she has also branched out to play other games as well, including titles such as Escape from Tarkov and Minecraft.

According to TwitchStats, AnneMunition has around 3,100 subscribers and averages over 1,500 viewers. Therefore, this should earn her at least $10,850 USD per month, before she receives further income from tiered subscriptions, tournament winnings, casting fees, sponsorships, merchandise sales, advertising, compLexity salary, Twitch cheer bit donations and tips. According to EsportsEarnings, she has won over $10,000 USD from various tournaments.

She generally streams from 00:00 UTC for 3 – 8 hours. She publishes her updated schedule here.

She enjoys pineapple on pizza.

Summarized from AnneMunition’s ‘Streaming 101’ blogpost:
• Choose a username that’s easy for people to remember and unique.
• Think about the image that you want to convey.
• Don’t copy the set-up of other streamers. Start out with basic equipment and if the subscriber count makes it worthwhile, invest in better equipment. Don’t operate at a loss.
• Streaming when big streamers are off-line, or steaming games that are small, but still have a decent viewership with fewer channels can help.
• Streaming is hard work and it can take a long time to grow a channel.
• Numbers vary from day to day, so don’t get depressed if your numbers suddenly drop from one day to the next.
• Success isn’t guaranteed, so don’t quit your day job unless you’re generating the income to justify it.
• Have a back-up plan. Completing a degree to fall back on is a good idea.

CORSAIR ONE PRO i180