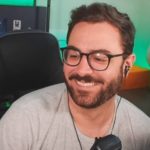 Watching IRL basketball, watching the Olympics and playing the piano.

He and his wife have a dog named Sally. He also has a brother.

His dog’s name is Sally.

Sallyisadog enjoyed collecting paper Yu-Gi-Oh! cards as a kid. He also played soccer when he was small, and then basketball and football when he was in high school. After college he went on to work at the White house for a while and then worked as a congressional staffer from 2016. He left his job to pursue fulltime content creation in September 2020. It was only then that he discovered how many of his former colleagues were also gamers.

He created his first YouTube channel in 2007. He discovered Twitch in 2018, with the first streamers being Merk and Maven. He really enjoyed his content, and he was one of the major inspirations for him to attempt streaming himself. He started streaming on Twitch in January 2019 and began uploading to his current YouTube channel in May 2019. However, he only really got into streaming in June that year. When Covid lockdown hit March 2020, he decided to put more effort into his YouTube channel. However, he saw that it wasn’t really working, so he looked into creating TikTok content instead, as it was not too saturated with COD content creators yet.

He originally started out by providing tips for those who were just starting to get into the COD franchise due to Warzone being released as free to play. This proved to be the boost he needed, as a few months later, one of his clips about easter eggs in COD blew up, and his channel went from 2,500 to 25,000 in a single night. Since then, he has used that momentum to expand on both his Twitch and YouTube channels as well. He has also gone on to develop more humorous content that includes banter with other major streamers including TimTheTatman and CourageJD. He also occasionally plays with other streamers such as Pineaqples, Merk and TeePee.

According to Sallyisadog’s Twitch overlay, he has around 3,200 subscribers and attracts over 450 viewers to his streams. Therefore, this should earn him at least $8,000 USD per month, excluding additional income from tiered subscriptions, team salaries, sponsorships, tournament winnings, tips, Twitch cheer bit donations and advertisements.