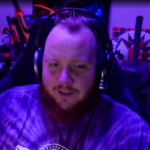 He and his wife have been married since mid-2016. They have a baby boy and a dog named Mesa.

It is a reference to his many tattoos.

TimTheTatman was introduced to video games by his dad, who bought him a Super Nintendo with The Hunt for Red October when he was ~5 years old. Aside from playing video games, he also played baseball and other sports right through elementary and high school. He began playing PC such as World of Warcraft and Counter Strike: Global Offensive when he was thirteen. He enjoys competition and was involved with sports before he was drawn to computer games.

After college, he worked fulltime as a social worker for at risk kids.

In 2012, while he was still in college, TimTheTatman started watching streams by content producers like Ninja Gaiden and Sodapoppin. When he realized how popular these streamers were, he recognized the opportunity to amalgamate his love of hanging out with people with his passion for video games. However, what truly motivated him to stream was the fact that although he was on Sodapoppin’s chat, Sodapoppin rarely spoke to him, and so, when he began streaming, he was careful to ensure that he personally engaged with his followers. This is why he often dedicates entire segments of his streams to providing feedback to his chats on Twitch.

And so, he set up and account and started streaming World of Warcraft on Twitch. But, he kept it as a light hobby until January 2013, when he set up his YouTube channel and dedicated more time to uploading consistent content to both platforms.

In late 2013, he opened an account on Twitch, primarily playing Overwatch. On March 27, 2014, he had gained 11,200 subscribers and decided that that was enough for him to risk leaving his job to stream full-time. As with many other streamers, his popularity really took off when he started playing Fortnite, towards the end of 2017. However, he continues to stream other games, and still makes time to respond to his chat feed.

In September 2021, he signed an exclusive streaming contract with YouTube Gaming and followed it up by signing with Complexity Gaming in November that same year.

He is estimated to have around 25,774 subscribers. This would net him $90,209 USD per month, excluding additional earnings from tips, sponsorships, merchandise sales, Twitch cheer bit contributions and advertising.

TimTheTatman emphasizes that people ‘need to have fun [when streaming]. If you’re not having fun with it, it’s going to be a tough, tough time for you.’