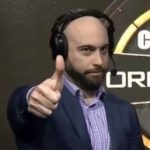 According to his Reddit AMA, ‘Maven basically means "to be skilled or an expert in something." A college friend of his called him the ‘Maven of Halo’ and it wound up becoming his nickname, so he adopted it as his handle as well.

He really got into gaming around 1997/98 when many of his now-favorite games were release such as  Final Fantasy VI – IX, Chrono Trigger and Legend of Zelda: Ocarina of Time. He first got into competitive gaming when his parents bought him an Xbox with Halo: Combat Evolved. He and his friends got hooked and would often skip school to scrim together. He then started watching videos of the Ogres, who were a professional Halo team during Maven’s high school years.

He attended his first Halo LAN event during his junior year of college and was beaten by Xena and her two brothers. The three of them discovered that they lived near each other and wound up constantly meeting up for scrims.

However, when his college workload became more intense, he put gaming on hold. He only returned to competitive gaming in 2012 with the release of Halo 4. ScottGandi reached out to him when it released and asked him whether he wanted to stream on Twitch together with him, as they had been friends since Maven’s competitive days.

He decided to give it a shot and the two of them soon gained a following. Soon afterwards, they were invited to cast an AGL Halo 4 tournament and they agreed. Although they continued to be offered casting opportunities, for the first year and a half, these roles were unpaid, which was especially difficult for Maven, as he was between jobs at the time. He even slept on ScottGandhi’s couch for a while. They then decided to move not Call of Duty (CoD), as they saw that there was more potential for a career with that franchise.

In May 2014, they were given their first casting job for the UGC Call of Duty Elgato event. His career skyrocketed from there, and he has been making a fulltime career out of streaming and casting ever-since.

His dogs are called Copper and Kevin.

According to his Twitch bot, Maven has over 3,100 subscribers. This puts his base monthly income at around $7,750 USD, before he gets more income from casting fees, tiered subscriptions, tips, Twitch cheer bit donations, adverts and sponsorships.

He doesn’t have a set schedule but tends to stream daily.