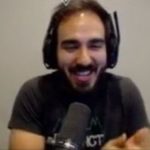 He and his wife have been married since May 2016. They have a dog named Louie.

He joined OpTic Gaming as their Call of Duty (CoD) captain in 2010 and remained with them until September 1, 2013. He then joined Team Envy a couple of days later. He continued to represent them until May 2015. He then went on to join Team JusTus for the rest of the season.

He then joined Team Liquid’s inaugural CoD team in January 2016 and remained on their roster until he announced his retirement from professional Call of Duty in April 2016 in order to pursue a fulltime position as the Console FPS Manager for Major League Gaming.

Merk was asked to join the Call of Duty World League (CWL) in early 2018 after CouRage decided to leave casting in order to focus on his streaming career. He has been casting for them ever since.

He started uploading SND content to his YouTube channel in September 2012 and started streaming on Twitch in October 2012.

According to his Twitch overlay, Merk has over 6,600 subscribers, which should earn him at least $16,500 USD per month. This excludes additional revenue from casting, tiered subscriptions, donations, Twitch cheer bit contributions, sponsorships, team salary and advertisements. According to EsportEarnings, he has earned over $245,000 USD from various tournaments.