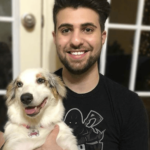 He and his wife have a few dogs. He has three younger brothers, two of which are streamers @JuniorPK and @Ottohoops.

SypherPK started playing games when his dad bought him a PlayStation 2 when he was eight-years old. When he was in Elementary school, he was introduced to RuneScape by some older children and loved it so much that he mained it for the next ten years and has been hooked on MMOs and FPS games ever since. During middle school, he started dreaming of becomng a fulltime gamer.

In middle school, he was given an assignment to produce a documentary as part of a History fair project. He found that he enjoyed filming and creating content, so he decided to set up a YouTube account to upload RuneScape content to in 2011.

Initally, he just did it as a hobby, but as he moved into high school and he got into the YouTube partnership program, he realized that it may become viable for him one day. Eventually, he moved on to Elder Scrolls Online in April-2014 soon after it released. He also started livestreaming on Twitch around that time after being inspired to pursue professional streaming by streamers like TimTheTatman and so started creating serious content for ESO. One of his main focuses was to develop educational content such as builds. His effort paid off and he was able to transition to fulltime content creation in the summer of that year. However, he only received Twitch Partnership in April 2015.

Before switching to Fortnite, SypherPK had attracted 75,000 subscribers to his YouTube channel. He attributes his success to a few factors. The first was grinding 13 hour days and the second was his decision to stream from 6:00AM rather than 12:00AM, so that he wouldn't be cometin with the major streamers like Ninja, in order to ensure to his 100+ viewer channel would be ranking higher on the Fortnite category page, and therefore be easier to spot by new potential viewers.

Another major factor was luck, as he had a big break a few months after he started maining Fortnite where someone posted a clip of his successful Trap Tower that went viral. The next day, he was up to 400 viewers from 100 on Twitch, which marked the beginning of his skyrocketing to one of the most popular streamers on Twitch. In April 2018, he joined Luminosity Gaming's pro-Fortnite team and remained with them until his contract expired in December 2019. During that time, he won over $55,000 USD in various tournaments, according to EsportsEarnings.

'PK' stands for 'Player Killing' from his RunseScape days, while 'Sypher' was just something that he chose during middle school because he thought that it sounded cool.

According to his overlay, SypherPK has ~10,900 subscribers. As he regularly attracts over 2,500 viewers to his streams, he should be earning at least $38,150 USD per month. This is before taking into account the additional revenue that he receives from tiered subscribers, advertisements, donations, Twitch cheer bit contributions, and sponsorships.