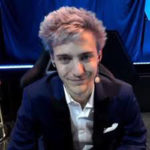 Ninja has been married to fellow streamer JGhosty since August 2017. His brothers are BeardedBlevins and Invictus.

His gamer name is actually partially derived from these early origins, as there is a move in Halo called ‘the ninja,’ that entails jumping over an opponent backwards. His name was also inspired by his love of anime, which likely explains is penchant for spiking up his hair and dyeing it various bright colors.

Ninja began gaming as a kid, when he and his brothers discovered their father’s computer game collection. Earth Worm Jim was one of the first games that he really put his own money into as a kid. His brother introduced him to Halo 1 when he was 12-years-old, which got him hooked on multiplayer games. His love for gaming grew, as did his skills. It was only when he began participating in Xbox live games, and he saw his ranking rise among professional gamers, that he decided to also participate in professional tournaments, which he started doing in Halo 3 in 2009, when he was just 16-years-old.

Ninja started streaming videos in his second year of college, when some his friend encouraged him to join them in streaming Halo: Reach on their sponsor’s site. The site wasn’t up yet, so he purchased a membership of Justin.tv instead. When he reached the point where he was making the equivalent of an annual minimum wage through his streams, he quit his job, but remained in college. When he hit the $60,000 USD mark, when he was around 20 years old,he dropped out of college to focus on streaming as he realized that he could make a living doing what he loved.

There were moments when he felt that it might be netter for him to switch to something else, such as when he underwent an eye-surgery that resulted in him ceasing streaming for over a month and caused him to lose many viewers. His first exposure to survival games was with H1Z1. His viewership rose almost immediately, and his exposure to H1Z1’s Battle Royal format eventually lead to his involvement with Fortnite in December 2017 after he watched a lot of his streamer-friends playing it and deciding to try it out himself. This decision has really seen his popularity skyrocket.

On August 1, 2019, Ninja announced that he would be ceasing his Twitch stream and transferring it exclusively to Mixer, where he has decided to change over to a 'mature audiences only' format.

NInja is estimated to have around 23,640 subscribers. This would net him around $82,740 USD per month. At his peek, he had ~41,500 subscribers, which would have minimally earned him $145,250 USD per month. These amounts exclude income from tiered subscriptions, tips, Twitch cheer bit, advertising, sponsorships, and tournament winnings. He was rumored to earn over $500,000 USD in November 2018 from Twitch subscriptions alone and $1 Million USD from Microsoft to play APEX Legends when it first released.

He also advises new streamers to avoid battle royale formats, and to rather focus on tournament formats. This is because random generated number (RGN) games are strongly influenced by luck. Competitive games, by comparison, are more fun to watch. Balancing between streaming and tournament participation is also a challenge, which is why he much prefers participating in online tournaments, especially given the potential revenue losses incurred by participating in a live event.