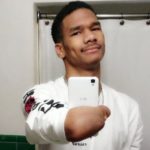 BlinkVII was born without hands, but it didn’t prevent him from living his life normally. He started playing video games such as Donkey Kong on his Nintendo 64 when he was around four years old. His first fps game that he really fell in love with was CoD 3 on his PS2. As a teenage he played other CoD titles, as well as other games such as Halo and Minecraft over other games. He was playing PUBG when Fortnite came out. It took him a couple of months to get into it and make it his main. This was after he saw TSM_Myth playing and felt that he also wanted to gain that level of skill in Fortnite. TSM_Myth also visited his channel a couple of times and encouraged him to work on his Fortnite gameplay. He primarily plays video games on his smaller-than-average wired Xbox One controller on his Microsoft PC.

He started uploading YouTube videos in August 2013 while he was still in high school and moved on to Twitch in March 2014. In November 2018, he decided that he had gained enough followers to drop out of college to focus on developing his streaming career. He is friendly with members of the FaZe team and often streams duos with them. His current dream is to be signed on with FaZe Clan. One of his big breaks came for him on May 16, 2019 when Tfue raided his channel. He mainly duo streams with xSezzy.

BlinkVII has ~800 subscribers, which should minimally earn him ~$2,000 USD per month, excluding additional income from other sources such as merchandise sales, tiered subscriptions, sponsorships, tips and Twitch cheer bit contributions.

BlinkVII doesn’t have a set schedule but tends to stream daily for between 1 – 5 hours per session.