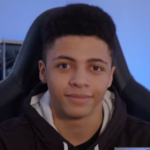 He has three sisters and three brothers.

His name is derived from his time playing Call of Duty when he was part of a team called the ‘Leprechauns.’ Each team member was called ‘Leprechauns X.‘ He wanted a cool-sounding name, and settled on ‘Leprechauns Myth.’

Myth began playing video games at around age two or three, when his brothers introduced him to Halo: Combat Evolved on the XBox, His brother-in-law bought him his own Xbox live account when he was 10-years-old, and the two of them would play against each other on a split-screen. When his brother-in-law realized how skilled he was, he introduced him to MPOL gaming as part of his team on Call of Duty: Black Ops 3.

While he was in high school, he became obsessed with League of Legends (LoL) and mained it four four years. This was until Fortnite was released in 2017 and he switched to that.

In 2013, he started watching TSM Snapdragon videos, in order to improve his LoL gameplay. He became a huge fan of TSM through watching Snapdragon and Soaryn. This inspired him to attempt his own career in streaming. Therefore, right before graduating high school, he broke the news to his family that that was the career that he would be pursuing after graduation. They were not thrilled, and it took a while for them to come around to the idea. His parents did however, eventually concede to giving him a two-year probation period to pursue his dreams.

TSM_Myth started streaming Paragon in May 2016, but he only really gained popularity in 2017 when he moved on to Fortnite and quickly gained high level editing and shooting skills that helped to boost his reputation and Twitch following.

He began focusing on fulltime streaming in ~September 2017, when his follower and subscriber base were still quite low. By early 2018, he was performing well enough to be signed on with his dream team, TSM. He moved into their team house soon afterwards.

Myth announced that he would be leaving in December 2021.

TSM_Myth is estimated to have around 6,080 subscirbers. This would net him between $15,200 USD per month, excluding revenue from sponsorships, tips, advertising, tiered subsriptions, Twitch cheer bit contributions and tournament winnings.

The way that I think is the best way to [start streaming] is to... integrate yourself within the community of the game that you're trying to play, as much as you can without... doing it wrong. Like, don't go to these streams and link this and link that or try to put your content in places that it obviously doesn't belong just to get a click or two. Try to come up with ways to make people care about your content and, you know, put you face in the game in a sense.