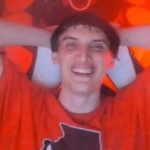 His parents are very supportive of the career path that he has chosen to pursue, although his dad is somewhat concerned about his health. He has a younger sister and two brothers.

Ac7ionMan grew up in an affluent home in the suburbs of Vernon Hills, where he spent much of his free time playing video games on the various consoles that his parents bought him and his siblings to share. His first real addiction to video games game when he got into World of Warcraft when he was fourteen years old and would sometimes find himself gaming for 20 hours straight. This went on for a year and half until Blizzard nerfed the game, causing him to lose interest in it.

However, it was around that time that he and his friends started smoking marijuana. This acted as a gate for him to heavier things until he first tried and became addicted to heroin in 2006 when he was seventeen years old. This robbed him of the next ten years of his life, during which time he was arrested four time on felony charged, the last being from a failed attempt to steal Axe shower gel from a convenience store. lasted until March 3, 2016 when he finally made the decision to turn his life around.

After getting out of rehab, he had hoped to pursue professional Halo, as that had been the last game that he had gotten into before completely losing himself to drugs. However, he quickly realized that that wasn’t going to happen. He then decided to try out streaming after one of his friends recommended that he give it a shot.

He started streaming Halo in January 2017 for up to 18 hours a day and continued to put in crazy hours without missing a day for the first 30 months that he streamed, as he realized that it was the only way that he could ever catch up with the other established streamers. He only started streaming Fortnite fulltime in February 2020 and has since moved on to streaming variety content as well.

His grind paid off, as he is now known in the community for his candid interactions with chat and extreme reactions to in-game occurrences. He has also attracted the attention of other streamers such as Tfue who has hosted him a couple of times, and Aircool whom me occassionally teams up with in games.

His language isn’t appropriate for kids.

According to his Twitch chat bot, ac7ionman has over 3,100 subscribers.  This should earn him at least $7,750 USD per month, excluding additional income from tiered subscriptions, tips, Twitch cheer bit donations, sponsorships, advertisements and merchandise sales.

He streams almost daily, usually for at least 9 hours per session.

He dreams of one day becoming a motivational speaker to help others who are either going through addiction or know of someone who is going through it.