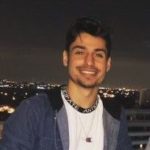 Although his parents are divorced, he is close to both of him. His parents are both supportive of his career choice, with his dad sending him daily voicemails from Italy and attending his EU events. His mom took some convincing in the beginning, though. He is also very close with his brother and cousins. He has a dog.

It was the name of his childhood dog that his dad rescued.

When he was growing up, he played soccer seriously, evening giving up his skateboarding to avoid injuring himself for it. He also spent a lot of time playing video games with is friends, in addition to developing his art skills. He started participating in and winning online CoD Search and Destroy (S&D) contests when he was in his teens, which motivated him to participate in LAN tournaments as soon as he got the opportunity and it was during his first year that he became involved with professional Call of Duty (CoD) tournaments.

His soccer skills gained him a college scholarship, but he was seriously injured soon after entering college, which forced hm to take a break while he recovered. He therefore redirected his focus to CoD.

Prior to becoming a full time professional, he worked in various sections of his local Shop Rite during his first year of college.

One day during his break from soccer, he heard that there was a CoD LAN event happening nearby.  ZooMaa and a few friends decided to enter, and his team placed twelfth in that first tournament.

This attracted the attention of Replays who recruited him in 2013 for Denial eSports, together with StuDyy and SaintsRF. They went on to win first place in the UMG Dallas tournament the next year. He dropped out of college at the beginning of 2015 to join FaZe Clan because they gave him the ultimatum to do so.

After he retires from pro-gaming, he plans on returning to college.

ZooMaa has ~1,600 subscribers, which should net him at least $4,000 USD per month. This excludes additional income from sources such as tiered subscriptions, his team salary, tournament winnings, sponsorships, tips, Twitch cheer bit contributions, merchandise sales and advertisements.

He has an inconsistent schedule due to his professional commitments.