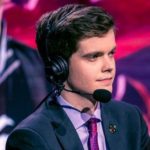 ODPixel grew up playing console games, and primarily played Call of Duty with his friends when he was a teenager. He discovered Dota 2 when he was in his late teens and although it took him a few games to get into it, he soon fell in love with it and made it his main game.

He only found out about eSports and casting after about two years of playing the game. He began watching matches on Twitch during his free time while he was in university, where he was studying Music Technology. He already had a background in broadcasting, as he had worked part-time for a radio station. Therefore, between his university specialization and past experiences, he was intrigued by the idea of attempting to cast Dota 2 matches himself.

ODPixel began casting with WakeyPixel for amateur DotA tournaments in February 2014 while he was still in university. They got into it by volunteering to do the casting, with ODPixel asking WackyPixel to join him because he was too afraid to attempt it on his own. They were able to physically cast together, due to their being IRL friends who lived close to each other. As those were still relatively early days for the industry, they were given the opportunity to do so. They spent the first couple of months casting as a hobby. It took them about a year and a half before their channel grew beyond twenty viewers per stream.

ODPixel was then approached by ESL UK to do a paid weekly broadcasting job, which he accepted. It was successful and he continued casting for them for a while. They were also offered the monthly casting slot as well. before moving on to the international scene.

He feels that his big break came when he co-casted the Beyond the Summit game between Cloud9 and SFZ alongside @Purge that lasted for 3h20min in March 2015. After that match, his Twitter following went from 500 followers, to 3,000 followers overnight, and more opportunities started being offered to him. When Dream League approached him, he decided to quit his job to pursue his casting career. He had completed his degree by then, his job was only part-time, and he was still living with his parents at that point, so although it was risky, it was one worth taking.

He is dating fellow caster, SheeverGaming.

ODPixel has few subscribers, with most of his revenue coming from tips, Twitch cheer bit donations and his casting fees.