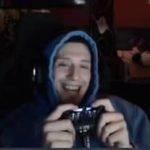 His parents are very supportive of his career choice, as is his older brother. He also has a dog.

NiceWigg grew up playing video games and got into competitive Call of Duty as a teenager. However, when Apex Legends released in February 2019, he decided to try it out. He fell in love with it and has been maining it ever since.

Prior to streaming fulltime, he worked as a personal trainer. He got into it after struggling with his weight when he was younger.

He started livestreaming on Twitch in February 2019 and uploading content to his YouTube channel in March 2019. Fortunately for him, he was hosted by dizzy in April 2019 after NiceWigg killed him in-game, which saw his channel taking a rise in viewership. He was then signed on to CLG’s pro-roster the following month. He remained with them until August 2020 when he decided to leave the organization.

According to NiceWigg’s Twitch chat bot, he has around 6,600 subscribers. As he regularly attracts over 3,000 viewers to his broadcasts, he should be earning at least $23,100 USD per month. This is prior to receiving additional revenue from donations, tiered subscribers, sponsorships and Twitch cheer bit donations.