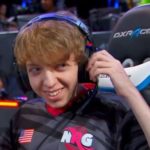 His parents are supportive of his decision to pursue a fulltime streaming career..

dizzy grew up playing Counter-Strike: Source and later transitioned to Counter-Strike: Global Offensive. His skill earned him semi-professional status with both Mythic Reborn and Selfless Gaming while he was a teen. In July 2019, he managed to get onto

This is how he started playing with Summit1G during his streams, before dizzy started his own channel. After high school, he decided to forgo college in pursuit of a gaming career.

dizzy opened his YouTube channel on June 13, 2013 and his Twitch account on November 25, 2015. In 2019, he made his big break when Apex Legends was released and he earned a name for himself by consistently raking high kill counts and breaking kill records, as well as winning the first Apex Legends Twitch Rivals event that took place soon after the games release. His skill even earned him recognition with NRG Esports, who signed him on on February 19, 2019, which was only two weeks after the game's initial release.

In July 2019, he managed to get a position on KingRichard's Twitch Rivals team after seeing him Tweet out that he might be a team captain for the event and reaching out to him with his stats. KingRichard was impressed and offered dizzy a spot on his

In December 2019, he announced his retirement from competitive play in favor of growing his channel and streaming variety content. He therefore stepped down from NRG Esports.

He has not yet revealed any pictures of himself.

dizzy has ~1,200 subscribers and often averages over 10,000 views per stream. This means that he should be earning at least $4,200 USD per month. This excludes other income that he receives from tiered subscriptions, tips, Twitch cheer bit, advertising, and sponsorships. EsportsEarnings places his lifetime tournament winnings at over $76,000 USD.

He doesn’t have a set schedule, but streams almost daily for between 5 – 24 hours.