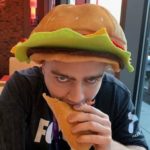 His sister is a YouTuber. They also have a brother.

Mizkif had always wanted to find a medium to make people laugh, and he had dreamed of doing it through social media while he was growing up. However, when he was in his late teens, he decided to rather pursue a career that would earn him money and had been accepted to college for a business degree.

The day before he was meant to start at college, he passed out for 24 hours. Over the next few days, his symptoms became worse and worse until his father had to rush him to the emergency room in the middle of the night. After a series of tests, the doctors discovered that he has a virus in his heart that could attack him at any moment. As he was recovering in the hospital, he reevaluated his current life course and decided that it wasn't worth putting his dreams on hold. So, he decided not to postpone college for a while as he figured things out.

Due to his medical conditions, he was too weak to immediately return to his current job, so he went to work for his friend's fathers's company for three months. He hadn't enjoyed it, so he left to return to living with his parents, who had now moved to Florida. He had originally planned on returned to his previous employee, but decided to attempt pursuing his childhood dream of content creation instead.

He therefore started creating funny 'story of' YouTube videos about various streamers in January 2016. He made friends with other bigger content creators and convinced them to try watching his content. His viewer count went up drastically within a short time and he was so successful that his channel took off within the first few months. However, even though he was attracting thousands of viewers, he wasn’t monetizing any of the content. This inspired him to transition to Twitch, as he saw the potential for him to make a living as a full-time streamer. However, for the first couple of years, he only streamed on Twitch a few times a month.

He experienced some health problems in 2017 that caused him to take a break from streaming. When he had recovered, he returned to streaming. However, he was only able to really focus on his stream in early-2018 when he started creating his ‘Who is - ?’ joke streamer biographic video series. This caused his channel to really begin to grow and for him to begin streaming fulltime. He attributes most of his success to Erobb221 and a few other streamers who supported him in encouraging people to watch his YouTube videos, as well as hosting him when he transitioned to streaming seriously on Twitch on July 5, 2018.

However, it took a while for his channel to grow, as although he had 300 viewers during his first livestream, this number dropped drastically when they realized that he was streaming World of Warcraft, as it wasn't popular at the time. He therefore decided to stick to chatting and variety streams until e found something that his viewers would really enjoy watching. He got his break one day after watching Pokelawls playing Marbles on Stream and deciding to try it out himself. For some reason, the Twitch community really took to it and his channel quickly started to grow. So, he stuck to it for a few months until he went back to variety and chatting, by which point he was doing comfortably on Twitch.

His stream is not appropriate for children.

He is in a long-term relationship with @MayaHiga.

According to his channel's overlay, Mizkif has around 8,450 subscribers, which should minimally earn him at least $29,575 USD per month, excluding additional income from tiered subscriptions, tips, Twitch cheer bit donations, sponsorships, merchandise sales and advertisements.