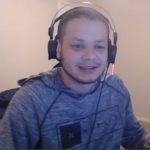 He has a daughter and is LoLTyler1’s younger brother. He is close to his mom and has two dogs and six cats.

Erobb221 originally occasionally featured on his brothers channel a few times and acted as LoLTyler1’s channel moderator for him when LoLTyler1 started streaming. He decided to start streaming on his own channel in February 2017, and was motivated to do so by his friends who encouraged him to try it out. Thanks to his fame from his brother’s channel, he started out with 200 viewers who were curious to see what he was like on his own. He still creates IRL content with his LoLTyler1. Erobb221 graduated from college in May 2019 with a Bachelor of Science degree. He started streaming more regularly after that. This is not a kid-friendly channel.

He has ~970 subscribers, which should minimally earn him a monthly income of ~$2,425 USD. This excludes additional revenue from tips, Twitch cheer bit contributions sponsorships and advertisements.

Erobb221 doesn’t have a set schedule but tends to stream several times a week for between 2 – 6 hours per session.