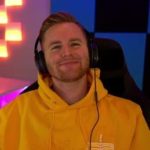 He and his wife have two cats and a dog.

Its a play on Top Gun, his profession and his name.

IceManIsaac started uploading Overwatch videos to his YouTube channel in May 2017 and moved on to Call of Duty around a year later. He received Twitch partnership on May 29, 2020. However, he only streams part-time, as he has a fulltime job as a pilot in the Air Force where he flies fixed wing aircraft.

According to his Twitch overlay, IceManIsaac has around 12,450 subscribers and generally attracts over 1,100 viewers to his streams. Therefore, he should  be receiving a minimum income of around $43,575 USD per month. Excluding additional revenue from tips, merchandise sales, advertising, sponsorships and Twitch cheer bit donations.