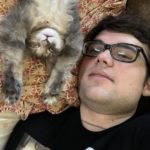 Dropped joined Rogue’s H1Z1 roster in February 2017 and started sporadically streaming on Twitch around the same time. In February 2019 he started playing Apex Legends and decided to start maining that instead. He moved to Rogue’s Apex roster in April 2019. However, it was only in May 2020 that he started grinding Twitch seriously and has been pretty consistent about it ever since.

In January 2021, he left Rogue. He still regularly plays with his former Rogue teammate, Huskerrs, as well as other streamers such as gdolphn and TSM_ImperialHal. He signed with SpaceStation Gaming in July 2021.

His cat’s name is Ivy.

According to Dropped’s Twitch chat bot, he has around 2,700 subscribers. Therefore, this should generate him a monthly income of at least $6,750 USD. This excludes the revenue he earns from tiered subscriptions, his team salary, merchandise sales, donations, Twitch cheer bit contributions, tournament winnings, advertisements and sponsorships.  EsportsEarnings estimates that he has won over $66,500 USD from various tournaments.