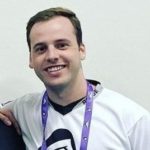 He has a Border Collie mix called ‘Max.’

According to his chat bot, ‘HusKers got his name back in CoD: MW3 when his friend came up with a list of random gamertags and one of them was HusKerrs, which he thought sounded cool.

HusKerrs started playing Apex Legends as soon as it was released in February 2019, as he was bored with CoD: Blackout.

Prior to becoming a full-time player, he graduated from college while participating in H1Z1 every couple of months on the weekends.

HusKerrs first started streaming his Delta Force 2.0 gameplays on Twitch as a hobby in August 2012, but soon began focusiing on Call of Duty: Modern Warfare 3 content instead. He very slowly gre over the years, firstly thank to his transitioning to an H1Z1pro-player and streamer in 2017, with is first tournament being in March 2017.  His team came third at the event, which made him realize that he had the potential to turn gaming into a career for himself.

Soon after college, he moved on to CoD: Blackout as part of Rogue’s team and was allowed to create his own team. Sweetdreams was one of the first players that he invited to join his team, as Sweetdreams had also played H1Z1 professionally in the past.

However, after a few months, he felt that there was no future in Blackout and was happy to jump to Apex Legends as soon as it released, as he felt that it was similar to Blackout. After over a year of pursuing professional Apex, he decided to step down in order to return to simply streaming CoD content om April 2020.

HusKerrs' Twitch bot puts appproximates that he has ~8,240 subscribers. This means that his minimum monthly earnings are ~$20,600 USD per month, excluding further revenue that he receives from tiered subscriptions, tips, sponsorships, Twitch cheer bit donations, merchandise sales, advertisements, his team salary and tournament winnings. According to his Twitch bio, he has received ~$19,663 USD from his top ten donators alone an according to EsportsEarnings, he has won over $110,000 USD from various tournaments.

HusKerrs doesn’t have a set schedule. He usually streams for between ~3.5 – 5 hours when he does stream.