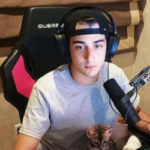 He has two younger sisters.

Lepore began playing video games in his early childhood, starting with Halo 1 followed by the rest of the trilogy. After maining World of Warcraft for a few years, he started playing H1Z1 in 2015.

He entered his first competitive tournament with Halo 3 at the MLG Meadowlandse event around 2008/2009, but stopped soon afterwards when he discovered World of Warcraft and became hooked. He then got into H1Z1 and began competing in it in Januaey 2017 as part of Rogue, successfully winning 13 tournaments during that time. He then went on to represt the Pittsbourgh Knights in Player Unknown's battlegrounds.

Although Cloakzy opened his YouTube in April 2015 and started streaming H1Z1 on his Twitch account in December 2015. However, his streaming career only really jumpstarted when he began posting clips of his Fortnite clips onto Twitter in December 2017 and slowly gaining a following. This eventually got the attention of Faze Clan, who asked him to join their organization in February 2018. That marked his true growth in popularity as a streamer, with his real growth in followers beginning in June 2018.

He and Tfue often stream duos together. Tfue moved in with him in May 2019, when he left FaZe Clan. In June 2018, it was announced that Cloakzy would also be leaving the organization. He is planning on remaining solo for now, while occassionally co-creating IRL content with Tfue.

Cloakzy is estimated to have over 10, 000 subscribers, with an average viewership of ~44,430. This would earn him at least $35,000 USD per month. This excludes additional income from sources such as tiered subscriptions, merchandise sales, tournament winnings, tips, Twitch cheer bit contributions, sponsorships and advertisements.

His streaming hours are irregular.