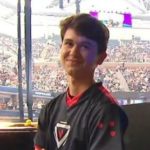 He has a brother and a younger sister. His parents have a dog named Zoey.

This is a nickname that his grandfather gave him when he was little.

Bugha started playing video games when he was three years old and he went on to play a variety of different games as he was growing up. He found out about Fortnite from his friends soon after it released and decided to try it out. He became addicted to it, and would watch streamers when he wasn't playing himself.

He is currently in Eleventh Grade and is completing high school online. He usually spends at least 6 hours a day training or conferring with other players. There is very little other personal information available about him.

After watching streams for a while and seeing how popular the broadcasters were, he decided to start streaming on his own channel in March 2018. His channel slowly grew, as he began climbing the NA ladder.

Bugha signed with Team Sentinels on March 25, 2019 and then went on to place 1st in the Fortnite World Cup Finals on July 28, 2019. This earned himself $3 Million USD, when he was only sixteen years old. He managed to beat Tfue in the process, who only placed 67th overall. A couple of weeks after his victory, he was stream swatted on August 8, 2019.

His family is very supportive of his career path and were all cheering for him at the 2019 World Cup Finals.

According to his Nightbot, he currently has ~5,540 subscribers. This should minimally earn him around $19,390 USD per month. This excludes additional income earned from other sources such as his team salary, tournament winnings (estimated to be at ~$3,035,900 USD, according to esportsearnings), tiered subscriptions, tips, sponsorships, advertisements and Twitch cheer bit contributions.