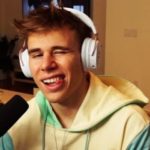 While Blaustoise was growing up, he enjoyed playing narrative-based video games. He then moved on to fps games like Call of Duty during high school and then began competing as professional play in the CSL for StarCraft 2. That was also the first PC game that he really got into, as he had primarily played on consoles prior to that.

After high school, he went on to complete his degree in Neuroscience and Political Science at the University of Chicago. He had originally planned on going into Intelligence or Counterterrorism, but this changed when he got an internship position as a User Experience Researcher for Sony PlayStation in June 2014.

This led to a fulltime position as an Associate User Researcher for them when he graduated from college. After that he went to work at Riot Games in early 2015 as a Gameplay Insight Specialist. He currently works for them as a Research and Development Analyst of new games.

He started streaming on Twitch occasionally in June 2014, but it was only in January 2019 that he decided to start streaming more consistently. He then received Twitch partnership in May 2019.

He has an older brother.

According to his Twitch overlay, Blaustoise has around 1,500 subscribers. This means that he should be receiving a monthly income of at least $3,750 USD. This amount excludes additional income that he gets from tiered subscriptions, tips, Twitch cheer bit contributions, advertisements, sponsorships and, of course, his fulltime job.