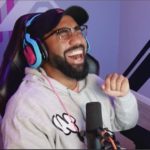 He has a wife, a couple of kids and a brother.

actionjaxon’s first video game was Super Mario World on the Super Nintendo Entertainment System. He enjoyed video games, but only really got into them with Grand Theft Auto III on his PlayStation 2.

Prior to streaming, he used to construct dog fences for dog owners. He later worked part-time for apple until July 2019, when he decided to go fulltime.

actionjaxon was laid off from his job in December 2013 and needed something to do. However, he was struggling to find a new job. At the time, he was a viewer on TimTheTatMan’s channel under ‘BlackPaul’ and Tim recommended that he try out streaming. Therefore, in February 2014, he decided to attempt a streaming career, starting with Hearthstone as it was the only video game that his computer was able to handle running and streaming at the same time. His channel grew so quickly that he was partnered with Twitch since April 2014. He had 1,200 viewers in his first stream thanks to TimTheTatMan’s promoting his stream.

His channel slowly grew as he moved on to other games. His channel then saw real growth when he decided to streaming Fortnite in 2017. He tries to keep his streams family-friendly.

According to his Twitch chat bot, he has over 1,215 subscribers. This puts his base monthly income at at least $3,035 USD. This excludes any additional revenue that he receives from tips, sponsorships, merchandise sales, Twitch cheer bit contributions and advertisements.

His birthday is on June 26th.