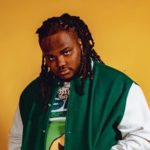 He lost his father to gang violence when he was young, and his mom is currently in prison. He has a younger brother.

According to his interview with Hour Detroit, ‘I’m a tall dude with dreads and hair all over my arms — [when I was locked up,] they got to calling me Grizzley. I just put the Tee on it.’

TeeGrizzley grew up in a difficult neighborhood in the west side of Detroit where there was a lot of poverty and gang violence. His parents were also influenced by that lifestyle and spent a lot of time in and out of jail when he was growing up. He got into video games during elementary school and continued gaming in his free time as he got older.

He grew up listening to street rap and having rap battles against other kids, but later gained an appreciation for professional rap. He realized that he had talent thanks to the feedback that he received from others.

By the time he graduated from high school, he realized where his street life was likely to take him and decided to go to college in the hopes of making something of himself. He therefore attended Michigan State University and tried to associate with people who were also focused on doing well in college. But he struggled to find a job in order to cover the fees and decided to get into burglary by robbing other dormitories after seeing how ‘well’ his friend was doing with it. This was only a few months into his first semester.

However, he was soon arrested on suspicions, which he confessed to. This resulted in 1½ years of incarceration split between Michigan and Kentucky. But, he returned to his old ways soon afterwards and got caught for robbing a jewelry store.

A year imprisonment followed by thirty months of parole.  It was while he was in prison that he really started to work on honing his rapping skills, writing authentically and developing his mixtape for his debut album, My Moment. On the day of his release, he recorded his debut single ‘First Day Out’ and it was published on the 4sho Magazine YouTube channel, where it went viral, earning him a signing with 200 Entertainment in 2017, which launched him into overnight stardom. Since then, he has gone on to release many other hits, including ‘Win’, ‘Jetski Grizzley’ and ‘Satish’.

He started uploading his rap singles to YouTube in February 2017, with the first being ‘First Day Out.’ He then decided to start streaming his Call of Duty gameplays on Twitch in July 2020 in order to engage with his fans on a more personal level. Thanks to his fame, he quickly gained viewers and had nearly reached 100,000 followers by the end of August 2020.

His language and content is not appropriate for kids.

According to his Twitch overlay, TeeGrizzley has around 1,900 subscribers. This means that he should earn a minimal income of around $4,750 USD per month from subscribers alone. This excludes additional revenue he gets from donations, his music career, sponsorships, tiered subscriptions, Twitch cheer bit contributions, merchandise sales and advertisements.