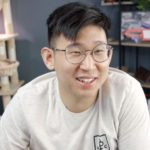 He has a sister, as well as two cats, Luffy and Nami.

TaehaTypes got into the hobby of keyboard construction while he was studying Computer Science Engineering and Applied Mathematics at the University of California, Berkeley. It started when he decided to construct his first serious gaming PC on his own and began to research building his own mechanical keyboard to go along with it. The more that he researched, the more fascinated he became. This inspired him to start designing and building custom keyboards in January 2018 as a side-business in addition to his fulltime job as an engineer at IBM.

He began uploading videos to his YouTube channel as a form of marketing for his products late January 2018 and quickly gained a following of other keyboard enthusiasts. Although they originally centered around highlighting the sounds and performance of his keyboards, he soon also started uploading videos of him building his custom keyboards from scratch as well. His channel and business grew enough for him to transition to working as a self-employed fulltime custom keyboard builder and part-time streamer on September 9, 2019.

His big break on Twitch came for him on January 19, 2020, when he live-streamed the construction of Tfue’s custom keyboard worth $3,500 USD. He has also designed keyboards for MOONMOON and scarra.