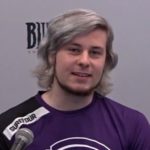 According to his Twitch autobiography: “Xboxlive came out and since me and my dad aren't very creative couldn't make up a name. So finally, we just settled on picking a suggested name and ‘Surefour’ was one of them and I've stuck with it.”

Surefure was introduced to video games by his dad and grew up playing a variety of MOBAs and FPS games, including StarCraft and Halo. He feels that prior to Overwatch, the only games that really motivated him to play competitively were Titanfall and Dirty Bomb. He gained a lot of his FPS skills during the ninth grade, while he was boarding with a family in Mississippi. His boarding school only taught until 12:00, so he spent the rest of the day playing Aion.

His FPS and RPG skills helped him to rank quickly when he began playing Overwatch. He was soon approached to join Team Canada to participate in the Overwatch World Championships, followed by Cloud9 in February 2016. He then joined Los Angeles Gladiators in February 2018., followed by Toronto Defiant in November 2019. He stayed with them until he decided to retire from the OWL in November 2020. He joined Team Sentinels' stream team in February 2021.

He is estimated to have over 3,400 subscribers, which would generate him a minimal monthly income of $8,500 USD, excluding additional income from tips, Twitch cheer bits, tournament winnings sponsorships and advertising.

He doesn’t have a set schedule, but he tends to stream several times per week.