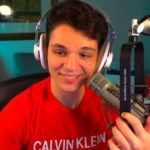 Ray__C is currently attending university where he is currently completing his Bachelor of Arts in Biology in the hopes of getting into the medical profession.

Prior to playing Rust, he made it to Masters in StarCraft II and Global Elite in CS:GO. He also played Arma 3 and League of Legends when he was in high school.

He started uploading content to YouTube in September 2015 and began streaming in December 2015. He has been playing with other streamers such as hJune and Trausi for years.

According to his Twitch overly, he has around 9,000 subscribers. As he often has over 5,000 viewers in his streams, this should earn him at least $31,500 USD per month. This excludes further income from other sources such as sponsorships, Twitch cheer bit contributions, donations, tiered subscribers, advertisements.