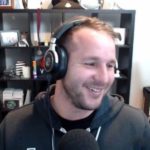 He and his wife got married in early 2019 and have a dog called Lindsie. They often hang out with his parents and both sets of grandparents. He also has a nephew.

He once started a clan called ‘Horsemen of the apocalypse, where he took on the name, ‘Pestilence.’ Everyone in his family started calling him ‘Pest’ because of it. His then-girlfriend added on -il’ to the end of it, which she did to everybody’s names. However, he didn’t like it, so she called him ‘Pestily’ instead. It caught on and has been his nickname and gamertag ever since.

Pestily grew up playing video games, starting with games on the Commodore 64 and Atari. He only became serious involved with video games when he discovered Half-Life in 1998. From there he moved on to Counter-Strike (CS), as it was originally a Half-Life mod. He and his cousin spent much of their teen years playing various fps games and going to LAN events together in their spare time.

In high school, he became addicted to World of Warcraft (WoW) and even lost a girlfriend because of it. He still continued to attend LAN parties and enter CS 1.6 competitions. After WoW, he moved on to EVE Online.

After high school, he joined the Australian army and spent eight years serving as an rifleman. He decided to leave the army on October 1, 2017 after sustaining a shoulder injury. After taking a three-month break, he joined the Metropolitan Fire Service part-time.

He started streaming a week after leaving the army while he was taking a three-month break before looking for another job in October 2017. He decided to try it out because he didn’t have anyone to game with during the day and wanted company. He was also hoping that he could gain at least 1,000 followers by 2020 with whom to share his planned mountain-climbing trip around Europe with.

Pestily found that he really enjoyed it and, after discussing it with his fiancé, decided to begin taking it seriously in February 2018. He therefore dedicated many hours a day after work to slowly growing his stream and managed to become a partnered Twitch streamer by May 2018. He transitioned to streaming fulltime in January 2019 when his wife had to move to the city for work, necessitating his quitting his fire-fighting job.

He met Slushpuppy when they had the same number of viewers and followers on Twitch and Slushpuppy reached out to him to create joint Tarkov content. They became friends and still continue to stream together.

Pestily is estimated to have ~4,800 subscribers. This should earn him at least $12,000 USD per month, excluding further income from tiered subscribers, tips, sponsorships, Twitch cheer bit donations, advertisements and merchandise sales. According to his Twitch biography, he has received over $10,460 USD for his top ten donators alone.