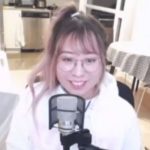 She has an older brother, a dog and a couple of cats.

According to her FAQ, ‘Natsu means summer in Japanese and mi is beauty! I was born in July.’

Natsumiii was introduced to League of Legends by her sister-in-law in 2012. She completed her degree in Bachelor Bachelor’s of Music in Piano Performance before focusing on a fulltime career in content creation.

She and Lilypichu are close friends and occasionally stream together.

Natsumiii has ~ 1,660 subscribers, which should earn her a least $4,150 USD monthly. This excludes additional income from other revenue streams such as sponsorships, merchandise sales, advertisements, tips, Twitch cheer bit contributions and tiered subscriptions.

She usually starts streaming somewhere between 18:00/00:00 UTC. Her streams generally last between 4 – 6.5 hours per recording.

Focusrite Scarlett 2i2
Tweets by @Natsumiii