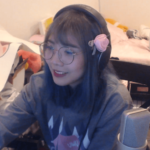 Drawing and playing the piano.

She has a younger brother and a she has a female cream Pomeranian.

When she was young, her favorite Pokémon was Pichu, so she combined that with her name.

LilyPichu has been playing video games since she was a child. She completed a two-year music degree before pursuing full-time streaming.

She created her YouTube channel in 2006 and started creating content for fun. She kept having new ideas for content, and since she sawthat people were interested in what she was producing, she decided to continue with it. Her channel slowly grew until she had gained enough of a following to become a full-time streamer in 2015.

She left the Offline.TV house in December 2021. She also mentioned that she would still be continuing to collaborate with them for at least a couple of more years.

LilyPichu is no longer in a relationship.

LilyPichu is estimated to have around 3,900 monthly subscribers. This would net her between ~$9,750 - $13,650 USD. This excludes additional income generated by merchandise sales, sponsorships, tips and advertising.

LilyPichu is taking voice-acting classes, as she hopes to become a professional voice-actress one day.