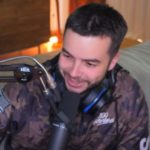 Nadeshot grew up playing fps and tps video games and still favors them today. His family was lower middle-class, so he started working part time at MacDonald’s for around 30 hours a week when he was 15 years old. He continued to plat games while balancing his schoolwork and job. He feels that getting that job really helped him to gain social skills and to learn to interact with others better than before, as he had been a bit of an outcast during high school.

Prior to streaming fulltime, he worked as a fast-food cashier.

He started playing in professional tournaments when he was 16 years old. In 2010 temporarily stopped competing in tournaments to create YouTube content, but decided to accept an offer from OpTic Gaming to replace a sick player. This eventually led to his first major tournament win in the following year, where he was able to bring home $100,000 USD. That was when his dad finally accepted his career choice. After that win, he decided to quit his job and drop out of his second year of college to pursue his gaming career. However, at that stage, he wasn’t earning enough money from his gaming to justify this decision. For a while, he was pretty much living off of his savings. He was even considering quitting video gaming.

However, CoD 2 was released soon after that and his channel finally began to slowly pick up. He streamed every day for around six hours per session and was careful to upload videos daily. It was only in 2013 that his channel really blew up, to the point that he had accumulated 700,000 subscribers by August 2013. This only three years after he had originally began to upload content to his YouTube channel.

He left OpTic Gaming in September 2019. He decided to leave Twitch in May 2021 in favor of streaming on YouTube Gaming.

Nadeshot’s parents worked very hard when they were growing up. His mom passed away when he was 20 years old. He also has a brother, a sister and a nephew.

His stream schedule is inconsistent.