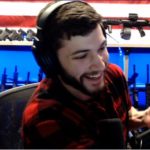 LVNDMARK first discovered Escape from Tarkov (EFT) in 2014 while he was still in college when its concepts were still being teased. But he only actually started playing it in 2017 when two of his friends bought it upon its release and encouraged him to also buy himself a copy. He had previously been maining games such as DayZ and ARMA together with them, but quickly fell in love with EFT as he felt that it was far more challenging than any of the games that he had played in the past.

He is self-employed and runs his own business out of his own. He prefers to keep the details private.

He started streaming on Twitch in early April 2019 and set up his YouTube account at the end of May 2019, He quickly made a name for himself as one of the top ranked EFT streamers, with consistently high kill-counts. However, his channel really saw significant growth in the wake of the 2020 Covid-19 lockdown, when he went from 30,000 Twitch followers on March 24, 2020 to over 180,000 followers by mid-June 2020.

His channel is not appropriate for children.

According to his Twitch chat bot, he has around 16,800 subscribers. As he regularly attracts over 20,000 viewers, he should be receiving at least $58,000 USD per month. This excludes the additional income that he receives from tiered subscriptions, advertisements, sponsorships, donations, and Twitch cheer bit contributions.