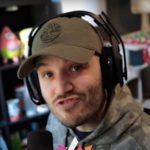 He has a brother and a nephew. He also has a cat.

LoochyTV started gaming in December 1995 after receiving a Super Nintendo with Mario Paint as a gift from his parents.

After high school, he went on to work as an Electrician and then as a Nuclear Submarine Electrician. However, he got laid off from his job in January 2020. Although he was upset about it at the time, he was actually really bore with his job and it turned out for the best.

He originally began livestreaming on Twitch in March 2018 and was very consistent about it. But he then became very irregular during 2019. However, understandably, he got back into it after losing his job in January 2020.

LoochyTV was inspired to begin creating TikTok videos after watching Gary Vaynerchuk’s TikTok and YouTube content. Gary V. had mentioned in his social media that TikTok would be the next big thing, and LoochyTV decided to trust him on that and so invested a lot of time in creating content for that platform. He attributes much of his growth and success to the decision.  However, he only started in January 2020.  He then signed with XSET in February 2021.

According to his Twitch overly, LoochyTV has over 1,600 subscribers. Therefore, this should earn him at least $4,000 USD per month, excluding additional revenue from other sources such as tips, tiered subscriptions, sponsorships, Twitch cheer bit donations, and advertisements.

His favorite childhood cartoons were Rugrats and SpongeBob Squarepants.