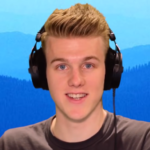 His brother is Chanzes and they also have an older sister. He is lives with his parents and he has a dog called Otto.

When he was growing up, his favorite video games were Pokemon. on his Nintendo Gameboy and Donkey Kong on his sister's Super Nintendo. As a teenager, he moved on to playing RuneScape with his friends.

Prior to his streaming career, Lachlan worked in a mall at a retail store.

Lachlan’s streaming career started when he was inspired to begin his own streaming channel in early 2013, after watching and subscribing to other streamers. In June that year, after taking his university entrance exams, he decided to defer entering university for a year in favor of attempting a career as a fulltime YouTuber, even though he only had around 3,000 subscribers at the time. He started out by streaming his gameplays of Pixelmon, which was a Minecraft spin-off mod that players to catch Pokémon from the original series, when he graduated from high school. He quickly garnered enough followers to focus on that as his career. He churned out two or three videos a day in order to help his channel grow, and succeeded in reaching 400,000 subscribers to his YouTube channel within the first year.

However, although he already had a decent following, it was when he joined Fortnite in 2017 that his streaming channels really blew up. At that point, he decided to drop out of his undergraduate course in Information Technology to focus on full-time streaming. In October 2019, he signed a deal with YouTube Gaming and has been exclusively streaming on their platform ever since.