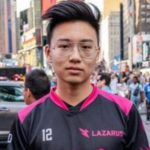 Kreo grew up mainly in Parkland, Florida and has been playing Fortnite since it was released in September 2017.

According to his chat bot, KreoFN has ~1,000 Twitch subscribers. This should earn him at least $2,500 USD per month, excluding additional income from tiered subscriptions, sponsorships, advertisements, tips, Twitch cheer bit donations, coaching fees and tournament winnings. According to EsportsEarnings, he has won over $1,174,000 USD from various tournaments.