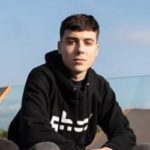 His older brother Paulo, used to use the gamertag ‘Innocents.’ Paulo passed away in mid-2014, which prompted Daniel to adopt ‘InnocentsJR’ in his brother’s memory. He later dropped the Jr.

Innocents first started gaming when he was introduced to Call of Duty 4 in 2008 when he was around ten years old. He used to watch his brother playing Halo 2 professionally and was inspired to follow in his footsteps one day.

He started playing Fortnite during Season 1 with a mouse on his PC, but it was only during Season 3 that he seriously got into Fortnite and began playing in bot races. This helped him hone his skills so that he felt confident enough to grind his way up the leaderboards during the next season. He was signed with Ghost Gamng rom February 2019 until the following February.

After completing his first year of college, he decided to drop out to pursue his dream. His mother supported him in his decision.

Innocents started streaming on August 11, 2018 and after three months of grinding, he was signed on with Ghost Gaming. He attributes is fast rise in viewership to his managing to consistently rank first on the leaderboards during the fourth season. He now prefers playing on a default Xbox Controller on a PC. He left Ghost Gaming in February 2020.

This is not a family-friendly channel.

According to his Nightbot, Innocents has ~2,620 subscribers. This should net him a monthly income of at least $9,170 USD. This excludes additional revenue from tiered subscribers, tournament winnings, Twitch cheer bit donations, tips, advertisements, sponsorships and his team salary. Esportsearning’s estimates that he has won around $12,750 USD from various tournaments.

While he doesn’t have a set schedule, he tends to stream several times per week for between 4 – 9 hours per session.