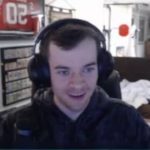 He has an older sister and a dog called Link.

He came up with it when he created his Xbox Live account when he was in 7th grade.

HBomb94 played football and basketball when he was in grade school but stopped when he discovered golf in high school.

After high school, he started studying Graphic Design at college and then switched to Marketing and Business.

One of the first big content creators that he started following was SeaNanners. He started uploading Call of Duty: black Ops content to his YouTube channel in January 2011. He then switched to Minecraft in October 2012 and has been maining it ever since.

He set up his Twitch channel in March 2011, but only started streaming later. He joined DreamSMP in September 2020.

According to TwitchStats, he HBomb94 has around 260 subscribers. This means that his starting monthly income should be at least $650 USD. This amount excludes additional income that he receives from tiered subscriptions, merchandise sales, Twitch cheer bit contributions, advertising, sponsorships and donations.

He’s afraid of snakes, the dark and heights.