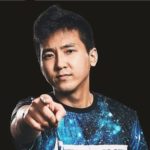 When he was younger, he and his best friend played a variety of MMOs, especially favoring Korean ones. He first started playing World of Warcraft (WoW) during middle school after his best friend got into it and encouraged him to play it with him. His first character was a Male Blood Elf Druid, but it took him a while to really get into the game. Since then he has transitioned to many different races, factions and classes.

It was only when he was inspired by watching Swifty’s YouTube videos to really give WoW a chance during the Wrath of the Lich King expansion in 2008. This inspired him to make a Warrior and levelled it up to level 80. But he then quit WoW for a while after someone hacked his account and got his character banned.

He first began uploading videos to YouTube in January 2011 and was partnered with YouTube in April 2012.  However, because most of his videos had copyrighted music in them, he had to delete them in order to be able to monetize his channel. He only started streaming on Twitch in mid-2016.

A major turning point for his channel’s growth was when he started creating WoW PVP movies. In November 2018, he changed things up by becoming a pro-Fortnite player for FlyQuest. That career was short lived and although he still occasionally streams Fortnite, his main game is still WoW.

According to his chat bot, Hansol has ~235 Twitch subscribers. This means that he should be earning at least $587.50 USD per month. This excludes other income that he receives from tiered subscriptions, tips, Twitch cheer bit donations, advertisements and sponsorships. He has won ~$4,150 from various tournaments.

Make sure, if you’re going to be using an artist’s music in your videos, that you have the artist’s permission first.

What it takes to be a 'Fortnite' pro link
Why I Changed My Race link
Ask Hansol #2: Tips on starting Youtube, Wildstar, and Jobs link
Hansol's Story link
Hansol's Twitch chat commands link