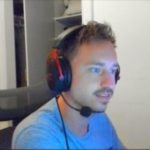 GeT_RiGhT started playing Counter-Strike during its beta phase in 2000.

In 2007, he joined Begrip followed by another team, but they fell through. His big break came in 2008 when he joined SK Gaming’s roster when he was still 17 years old. However, his position was short-lived, so he then formed a team with some of his friends and beat other SK Gaming and Fnatic at tournaments. Fnatic then approached him and he became a member of their team from February 2009 until 2010, at which point he rejoined SK Gaming.

He then signed with Team Dignitas in January 2020.

According to his Twitch chat bot, GeT_RiGhT has around 170 subscribers. Therefore, his base monthly income should be around $425 USD, before he receives more income from tiered subscriptions, tips, his team salary, tournament winnings, Twitch cheer bit donations, adverts and sponsorships. EsportsEarnings puts his lifetime tournament winnings at over $615,000 USD.

He still gets very nervous when conducting interviews or playing in front of a live crowd.