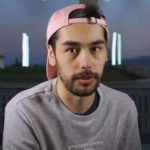 Frexs was introduced to video games by his dad who played video games himself. So, young Frexs just played the consoles and games that this dad had while he was younger and then moved on to his own games when he got older.

He first started streaming H1Z1 on Twitch in October 2015. However, he only really started making a name for himself in PlayerUnknown’s Underground by reaching Top 10 Squad TPP North America during the game’s first four seasons. This attracted the attention of Cloud9 who signed him on to their PUBG roster in October 2017. He moved on to Apex Legends upon its release in February 2019 and transitioned to Cloud9’s 4-player Apex roster in March 2019. But this was short-lived, they released the roster in August that year. He then joined NRG Esports in January 2020 and remained with them for a full year. He was then signed with Spacestation Gaming in March 2021.

Despite being on Twitch for so long, he has only been consistently streaming since January 2020. But he slowed down in June 2021.

According to his Twitch overlay, Frexs has around 540 subscribers. This means his base income should be around $1,350 USD per month before taking into account the income he gets from tiered subscribers, his team salary, Twitch cheer bit donations, sponsorships, tips, advertisements and tournament winnings. EsportsEarnings puts his lifetime winnings at over $30,000 USD.