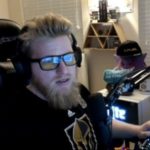 Most of his friends played video games, when he was in high school so he would play games with them when they used to hang out. He completed his degree in Computers in 2014 at the Ohio State University.

Fl0m founded the Mythic CS:GO team, now known as Mythic Reborn, in 2012 alongside AdreN, Polen, Hazed and Anger. He remains a co-owner of the organization. He started streaming fulltime in 2015 and regularly plays with JoshOG and Summit1G.