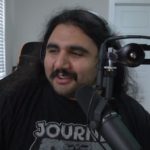 Esfand is a type of Persian spice.

EsfandTV’s first started playing MMORPGs with Dark Age of Camelot when he was a kid. Although Esfandtv had been playing WoW since November 29, 2004, it was only for fun. He actually dreamed of becoming a football coach. However, when he was in college, he was injured and was no longer able to play. He continued to work with coaches for two years as an assistant while in college, but the position he was working towards fell through. This was a week after college, and he didn’t have a job yet.

One of his friends told him about the ‘Elysium’ Horde guild on WoW. He decided to join the guild and create some videos just to keep himself occupied while he looked for work. This was in April 2017. After around three months, he decided to start live-streaming and attracted 50 viewers during his first stream. He therefore continued to do it and eventually reached 500-600 viewers per stream and considered becoming a fulltime streamer.

However, he was banned for streaming a private server, which slashed his hopes. He then messed around for the next few months while he tried to figure out what else he could do. He did research and also made friends with Asmongold and Mcconell and would play PUBG with them almost every night. They advised him to continue grinding on a non-vanilla server on WoW.

For the next few months, he hardly earned any money from his streams and had been denied Twitch partnership. He was then approached by the new SMU football staff to assist them with coaching on a part-time basis. He accepted the position as a back-up plan while he continued to grind.

Fortunately, people noticed him, and he slowly grew. However, he still couldn’t play Vanilla WoW, so he was stuck playing other games. His big break came when he attended Dreamhack 2018 when his channel suddenly expanded massively. Esfandtv was finally partnered and had achieved 1,000 subscribers, which finally allowed him to pursue fulltime streaming. A few months later, he made the move and has been streaming fulltime ever since. When WoW Classic was released, he was finally able to return to his main game. He is mainy known for his Paladin Ret play.

He attributes his success to all of the other streamers who supported him during his grind and offered them their advice, including Trainwreckstv, Professor Akali and Sodapoppin, among others.

He joined Method's stream team in February 2019 and remained with them until mid-2020. He then founded his own team, OTK, in October 2020.

Esfandtv has over 8,660 subscribers, which should minimally generate him over $21,650 USD per month, excluding additional revenue from tips, advertisements, sponsorships and Twitch cheer bit contributions.