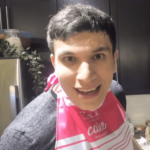 He is close to his parents.

Little is known about him.

Trainwreckstv started streaming on June 26, 2015. However, his channel only really started growing in late 2017, finally exceeding 4630 subscribers in December 2018.

He has medium length, wavy black hair and dark brown eyes. He is generally clean-shaven and doesn’t wear glasses.

According to his Twitch account, Trainwreckstv has ~10,590 subscribers, and usually attracts over 6,000 viewers. This means that he starts out with a base monthly income at least $37,065 USD per month. He can then expect more revenue in the form of sponsorships, tiered subscriptions, donations, Twitch cheer bit donations, merchandise sales and advertisements. he has made over $106,150 USD in tips from his top 20 donators alone.