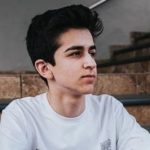 As a child, he became very focused on solving rubik's cubes, which made him realize that he enjoyed startegic problem solcing tasks. He feels that these traits, along with a great deal of self-discipline and time management, are what contributed towards his high-level skills in Fornite.

His school work is very important to him, and he is always careful to finish his homework, including those towards college credits, as soon as he gets home fro school. Only once he is done does he spend the rest of his time until bed at ~23:30 grinding in-game.

After qualifying for the Fortnite World Cup finals on April 29, 2019 during the World Cup Week 3 Solo tryouts, he started attracting the attention of big teams and signed on with NRG Esports on July 19, 2019 when he was 16 years old.  This was shortly before he succeeded in ranking 3rd in the Fortnite World Cup Finals on July 28, 2019, earning $1,2 Million USD in the process.

EpikWhale currently plans on taking a gap year after completing high school in order to pursue his pro-career with NRG Esports. His parents are obviously very supportive of his goals, which is unsurprising given his achievements thus far.

He has an older brother and a dog.

According to his Nightbot, he currently has ~150 subscribers. This should minimally earn him around $450 USD per month. This excludes additional income that he earns from sources such as his team salary, tournament winnings (estimated to be at ~$1,264,950 USD, according to esportsearnings), tiered subscriptions, tips, sponsorships, advertisements and Twitch cheer bit contributions.

He tends to stream daily for between 3 – 4 hours per session.