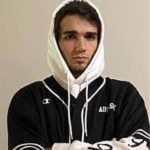 Dezignful grew up playing various video games and sports. He even represented his high school’s varsity football team. He originally started out as an Xbox player before switching to PS4 and then finally settling on PC.

After originally making an attempt at breaking into Fortnite and then Call of Duty: BlackOps 4 | Blackout, he switched to Apex Legends soon after its release. He and his friends then formed their organization-less team, AimAssist in August 2020 to compete in online tournaments. He has been seriously streaming on Twitch since October 2019.
He joined G2 Esports' Apex Legends team in June 2021, and remained with them until he announced his retirement in May 2022..

According to Dezignful’s Twitch chat bot, he has over 1,750 subscribers. This means that his starting monthly earnings should be around at least $4,375 USD. This excludes additional revenue from tiered subscriptions, Twitch cheer bit contributions, advertisements, tips and sponsorships. EsportsEarnings put his total tournament winnings at over $19,000 USD.