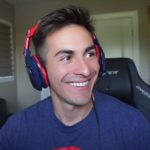 His parents divorced when he was young, so he and his older sister were primarily raised by their mom. He also has two dogs.

His original gamertag was ‘DougieFresh,’ because it was given to him by his fourth-grade teacher. After CoD 4, he decided to change his handle and wanted to go with a synonym for ‘conscience.’ However, he picked the wrong website, as it listed ‘censor’ as a viable alternative. He chose it, only later realizing his mistake. However, he liked it and stuck with it anyway.

Censor grew up playing Crash Bandicoot and Super Smash Bros. with his best friend.  He only really became focused primarily on video games when he was around 11 years old.

He discovered Call of Duty when he was 12 years old and became hooked. He spent most of his free time in high school playing in pubs in Call of Duty (CoD): World at War. He would often play for 12 hours a day, and he didn’t have many friends during that time. Despite winning a CoD tournament when he was seventeen years old, he didn't see professional eSports as viable career option and temporarily put CoD on hold while he attended university.

After reaching the top of that ladder, he switched to Game Battles and slowly climbed that ladder. That was where he met now retired pro-CoD player, Vengeance.

He competed in his first pro-tournament when he was 16 at the 2011 MLG Dallas tournament. He and his teammates managed to rank 8th, but he decided to join with Vengeance for future tournaments. They continued playing together throughout that season and managed to win the MLG National Championships later that year.

He went to college for a year and a half but dropped out to pursue a career as a pro-player and streamer after Activision announced the they would be holding $1 Million USD CoD tournaments. He and his mom agreed for him to take a year off of college to attempt at a career at video games. Fortunately for him it worked out and he was signed on with FaZe in Januery 2016, where he remained until October 2019. At that point, he moved over to New York Subliners.

He is currently taking a break from tournament participation. He joined Boston Breach as part of their stream team in April 2022.

Both of his parents are supportive of his career choice.

According to his Nightbot, Censor has around 1,015 subscribers. This should earn him  ~$2,537 USD per month, excluding additional revenue from tired subscribers, his team salary, advertisements, sponsorships, tips, and Twitch cheer bit donations. In November 2017 he purchased his first house.