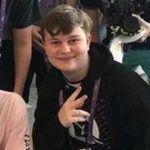 He and his brother were raised by his mother on a small island town just outside of London, as their father passed away when BenjyFish was a baby. They have a cat called Magic.

BenkiFishy's brother, who is seven years older than him, introduced him to video games on his PlayStation when he was very young. Some of these games included Guitar Hero and Tenpin Bowling. his first fps game, Call of Duty on the Xbox, when he was seven years old. He also started bowling when he was three and took it very seriously, even entering and winning many competitions until he was ten-years old. However, he developed a leg-injury, which forced him to stop bowling. This caused him to start focusing more on video games and he even started dreaming of becoming a pro-gamer when he was thirteen.

In March 2018, he began playing Fortnite seriously. Later that year, he and MrSavage met online through solo pop-up tournaments on Fortnite, where they often found themselves killing each other. They recognized each other’s’ skills and decided to team up for duos.

BenjyFishy started streaming seriously in November 2018, when he started playing duos with MrSavage. By January 1, 2019 he had reached 1,000 followers on Twitch, 100,000 by June 2019 and over 380,000 followers by November 2019. He was signed on with NRG Esports in March 2019, which helped to catapult his stream’s popularity.
He started entering Fortnite tournaments in July 2018 and started winning money. When the Fortnite World Cup was announced in March 2019, his mom suggested that he switch to being home-schooled by private tutors in order to focus on training for it. He decided to go for it and has been a full-time streamer and pro-gamer ever since.

BenjyFishy is estimated to have ~500 subscribers, with an average viewership of ~2,200. This should earn him at least $1,750 USD per month, excluding additional income from tiered subscriptions, sponsorships, tournament winnings, team salary, Twitch cheer bit contributions, advertisements and donations. He is estimated to have earned at least $340,000 USD from various tournaments.